Year of the Rooster

Few Chinese Horoscope books contain overall prognostications for the year. In my large collection of these books, one of the few that does is the first edition of Theodora Lau's The Handbook of Chinese Horoscopes, published in 1979. Unfortunately, in the later editions of this book, her overall predictions for each year have been removed.

To provide my friends with this interesting information, here is Ms. Lau's overall forecast for the Year of the Rooster, plus her predictions for how individuals will fare this year, given the animal that represents their birth year. (To determine what animal you are, see my table of animals for birth dates.) 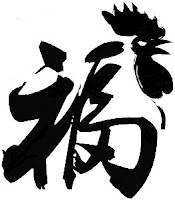 
The optimism of the Monkey year overlaps the year of the Rooster, but the Rooster tends to be overconfident and is prone to come up with nonsensical plans. While the colorful Rooster brings bright and happy days, he also dissipates energy. Better stick to practical and well proven paths. Forget about that controversial best seller you were going to write. No get rich quick schemes this year, please!

It may require a great deal of effort this year to resist going off on wild goose chases. Refrain from making speculative ventures. Disappointments and conflicts will result. The Rooster likes to flaunt his authority and a lot of trouble can come from his domineering attitude. But since he also symbolizes the good administrator and conscientious overseer of justice in the barnyard, the peace will still be kept. Everything will be precariously balanced in the Rooster's year, as his dramatic personality can set off all kinds of petty disputes.

This year we may have to expend maximum effort for minimum gain. Try not to fuss too much. Details do need looking into, but don't forget to view the whole picture. Be cautious. Do not aim too high. One is liable to get shot down.

Politics will adhere to hard-line policies. The diplomatic scene will be dominated by philosophical orators who rave a lot about nothing. Governments will be found flexing their muscles at each other, but just for show. There may be no real confrontations. It is just that everyone will be too occupied with himself to hear or care what the other person is saying. The self-conscious influence of the Rooster will cause us to take offense at the smallest slight. We will tend to be terribly ostentatious about the splendid image we think we project. Dissensions and debates on all fronts will signify the Rooster's penchant for argumentative exercises and will not be likely to do permanent damage to anyone when taken in the right context.

This will be a buoyant year in spite of the Rooster's knack for making simple things complicated. One thing is for sure: he seldom comes up empty-handed. This is the year of one very self-sufficient bird that will never go hungry.
Just keep your eyes open and your mouth shut and check facts and figures before making unprecedented moves. We should all get by without too much hardship. Our pockets will not be empty although our nerves may be a bit frayed.


How you will fare in the Year of the Rooster

Rat              Celebrations are in store for the Rat. New partnerships or a marriage are in the family. A very hectic time as good things could happen overnight. Due to his busy schedule and many commitments, the Rat must be on guard against infections, cuts, bruises and overwork.

Ox               The Ox will have a moderately happy time and will still enjoy success although he could experience one strange or unlikely incident this year. He should be on the watch out for some foreclosure in property or being swindled by a friend.

Tiger          A moderate year. The Tiger must not be over-anxious. The seemingly large problems that beset him this year can be solved and help will come at the last moment from unexpected places or newfound friends.

Rabbit       A difficult year for the Rabbit, as he finds money dwindling away and meets setbacks that cause extra expense. A time for him to merge with others and let them carry him through. He should be conservative this year and not act independently. Problems and obstacles at home and at work will be over­come, but not before they cause him a lot of frustrations.

Dragon       A happy and eventful year for the Dragon: good news, promotions and the return of money given up for lost. His family life is smooth and he is able to recoup losses or make new influential friends.

Snake         A very auspicious year. The Snake's achievements can be fantastic as he will receive the recognition or promotion he deserves. He will be rewarded for his patience and past perseverance. Profits or some big increase in income can also be expected. Home life is pleasant as the Snake reaps the fruits of his labors.

Horse         A fair year. Good tidings at home but slight disturbances in career. The problems he encounters will not be large ones but they may slow down his progress and he will tend to get upset too easily.

Sheep         An entertaining but rather expensive year. The Sheep spends more than he earns and may be faced with irritating disputes or conflict at home. A year in which he should not try to please everyone and watch his finances very carefully.

Monkey     A moderate but stable time for the endeavors of the Monkey person. He will have the extra money he needs and the right contacts to push his plans through, but in turn he will neglect his home life, take on too much forced socializing and find himself exhausted or overextended where commitments are concerned. A year in which he must not underestimate his opponents.

Rooster     A moderately happy year in store for the Rooster. A time for him to make a splendid comeback. He is able to solve his problems with relative ease and he finds influential or powerful people who will support his ideas. He may still be involved in disputes but will emerge unhurt from accidents or other calamities.

Dog           A mixed year for the Dog native. Problems with health, romance, govern­ment or superiors are indicated. Friends are not helpful or understanding and he finds it hard to get back money due him. He will suffer temporary loss of position and credibility.

Boar         A busy and fair year. The Boar's domestic scene is calm but his advancement will be curtailed or interrupted. He spends a great deal of time and effort to overcome obstacles and must be patient with negotiations that are complicat­ed and involved.


From: The Handbook of Chinese Horoscopes by Theodora Lau, First Edition, 1979
Posted by Unknown at 11:41 AM 2 comments: